Samsung Galaxy Note 10 Plus coming with of 12GB RAM. This November, Samsung unveiled the debut of a special edition of the Samsung Note 10 Plus device in honor of the Star Wars saga, which will feature incredible design and excellent specs like quad cameras and 12GB RAM. Discover all the details of this new release!

According to the latest reports, the Korean brand has finally launched the long awaited super special Star Wars edition of its latest flagship Galaxy Note 10 Plus! The device is already on sale, even before the release of the new Star Wars movie: The Rise of Skywalker. In detail, the new flagship provides software and design elements inspired by the Star Wars saga. In addition, the device has a beautiful black color scheme with red accents and a contrasting S Pen with these elements. There are also new Galaxy Buds included in the package.

In addition, the Samsung phone is preconfigured with Star Wars-based user interface elements; like wallpapers, transition effects, icons and sounds. As for the display, the Samsung Galaxy Note 10+ Star Wars specifications offer a 6.8 inch Full HD + AMOLED display with a resolution of 1440 x 3040 pixels. In addition, the Samsung Galaxy Note 10+ Star Wars camera will feature a fourfold configuration consisting of a 12 MP primary lens; a 12 MP telephoto lens and a 16 MP wide sensor, plus a 3D ToF sensor. 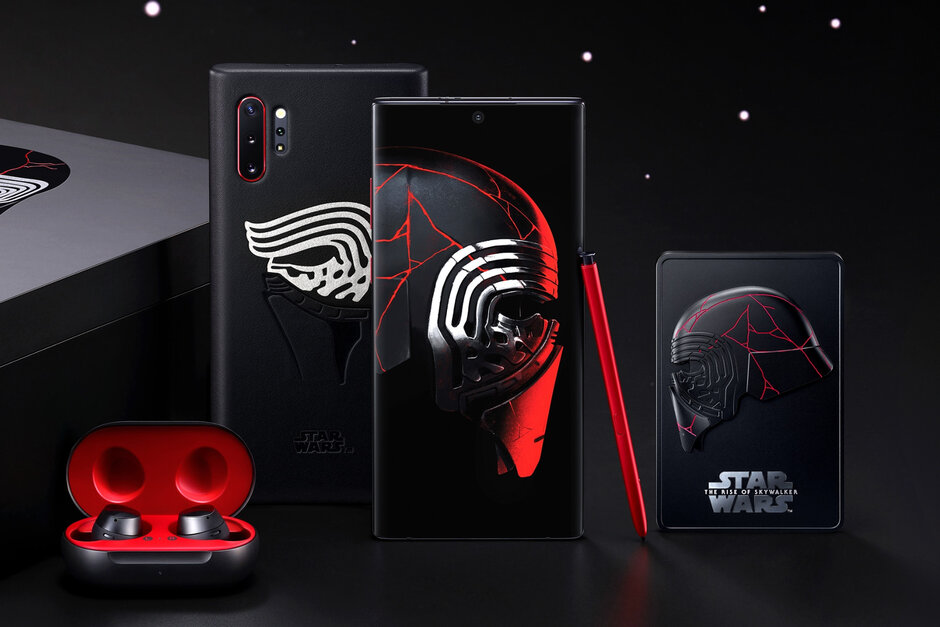 Meanwhile, on the front panel, this Galaxy Note 10 Plus handset has a single 10 MP lens for taking selfies and making video calls. And the battery capacity? This Samsung machine has a 4300 mAh battery with a 45 W quick charge support. Now, let’s talk about the operating system! This Samsung flagship is coming up with Android 9 Pie based on a custom user interface; as we commented at the beginning. In addition, the Samsung device has the chipset Exynos 9825 with a Mali-G76 MP12 GPU. In addition, the Samsung handset also offers up to 12 GB of RAM, plus internal storage of up to 512 GB. The Samsung machine has slot for two 4G VoLTE SIM cards. Other features include dual band Wi-Fi, Bluetooth 5, A-GPS, USB 3.1 and NFC, as well as the S-Pen.

The Samsung Galaxy Note 10+ Star Wars release date is set for December 13 in the US and later in markets in other countries. As for the cost, the price of the new Samsung Galaxy Note 10 Plus Star Wars can start at around $ 1299 at Best Buy, Microsoft and Samsung. So, were you looking forward to seeing this new special release? Leave a comment below to tell us!